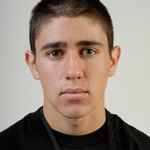 When you mention the name Alex Perelson to the mainstream action sports fan, they usually do not recognize the name nor can they associate a face with it. However, to those who have followed skateboarding close enough to make suggestions on who will rule the vert class in the future the consensus is unanimous; Alex Perelson is the future of vert skateboarding.

Not since the coming of fellow skateboarders Shaun White and Ryan Sheckler has there been a young skater who poses such dominant talent in his age group. Alex began competing in the amateur class early in the 2000ï¿½s and quickly rose to the top of the ranks. After capping off an amazing year in 2005 with the LG Action Sports Championships gold medal in the amateur class, Alex continue to show dominance with an impressive win at the Tampa Am vert event. He decided it was time to step up in the ranks to pro in the 2006 Action Sports World Tour San Diego event. While he considered it an event to test the waters in the pro ranks, other skaters felt they had been served notice with his amazing 7th place finish.

Alex has picked up where he left off with impressive finishes for 2007. He has qualified for finals in the Action Sports Dew Tour twice and at the 2007 X Games he narrowly missed the podium, finishing in 4th. He has already distinguished himself as a high flyer who can boost 10 foot airs with ease, but he is also a threat to any best trick contest with his tail grab 720 and 540 variations. At only 16 years old, Alex is already virtually unstoppable in arguably the most competitive field in all action sports.

Although he is shy, soft spoken, and slight in stature (5ï¿½5ï¿½), his skating portrays him as a giant. Alexï¿½s level of talent belies his age. The future is Alex Perelson and believe it that everyone will know his name!

Favorite Trick: Frontside ollie or a 720

Activities Other Than Skating: Playing guitar, poker, and making videos