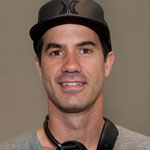 Bob Burnquist grew up in Sao Paulo, Brazil and began skateboarding at age 11. In 1995, he showed up at the Slam City Jam in Vancouver, BC and competed against every top skateboarder in the world. An unknown to most, he amazed everyone with his technicality and switch-stance lines, and ended up taking first place. And that's how the story begins.

Bob symbolizes motivation, progression and passion. Once a young lost soul, Bob has evolved into a remarkable human being and role model. He has accomplished more in the last few years than most people do in a life time. He has won almost every award and contest possible, leaving a legacy of versatility and style for generations to follow. He is not only respected by his peers, he has also been recognized by the mainstream sports community, including the ESPY nomination for Action Sports Person of the Year which was presented to him by his hero Michael Jordan.

Although Bob is recognized around the globe as a leader for skateboarding's progression, he has not forgotten his roots and is a role model for other Brazilian skaters. He has brought notoriety to the country, and has opened the gates for other gifted Brazilian skateboarders. He has appeared on Fox's "Best Damn Sports Show, played a main role in MVP 2, is a playable character in Tony Hawk Pro Skater and X Games Skateboarding video games. Bob has graced the cover of SPORTS ILLUSTRATED fo Kids, featured in ESPN The Magazine and many of Skateboarding magazine covers.

Since Bob moved to California, he has purchased a home in Vista and added his own backyard skate pool and ramp. In 2000 Bob became a father when his partner, fellow professional skater Jen O'Brien, gave birth to their first child, a daughter named Lotus.