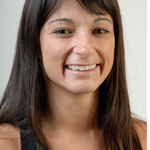 Perhaps the most widely recognized athlete on inline skates, Fabiola has everything: looks, brains and raw talent. From 1996 to 2001, she picked up six X Games gold medals. In 2002, her skating skill forced the inline industry to rethink the entire structure of vert competition. Now, she competes with the men and almost always finishes in the top ten. In 2005, she became the first woman to pull a double back flip, a trick that only a handful of men can do. Not only can Fabiola compete at the highest level on the half-pipe, she also puts together gutsy park course lines. Fabiola has appeared on MTV's Switched and Jimmy Kimmel Live and she is currently in negotiation with a Hollywood production company who wants to make a movie out of her life. A true ambassador for women in sports and for skating as a whole, Fabiola continues to push her limits. Inline skating never looked so good!

Activities other than riding: Going to the gym, surfing, hanging out with friends.

Hero/Influence: All the people who helped me and are still helping. The ones that believe in my sport and my passion which is Rollerblading. My father, who's one of the biggest influences in my life, he also gave me my first pair of skates.