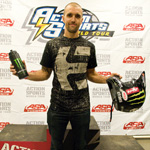 Jamie Bestwick has been ruling the vert ramp since he began riding in England in the early 80's. But it wasn't until he quit his job and moved to America that he really started to get the recognition he deserved. That was 1998, and since then, he has won every major modern day BMX vert riding event and title there is. Jamie is an all-around amazing vert rider. He goes huge, carves both ways, and in 2003, he debuted the tailwhip flair, a trick so complex that he is the only rider to do it. In addition to collecting gold medals, he also collects Star Wars memorabilia.

Worst Injury: Broken humerus (not funny at all)

Coolest thing you own: My son Samuel, he's a chick magnet, I am just there to carry him.

Best event you have competed in: LG Manchester last year. It was great riding in front of my home crowd, and my family was there too.

Activities Other Than Riding: Photography, moto gp, and English football