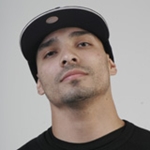 A naturally gifted bike rider, the sketchier the ramp, the higher Jorge blasts off it. To find him at any riding spot is easy, look for the rider most likely going higher than anyone else. A serious wrist injury in 2004 took him off the fast track to the big time - temporarily. Healthy once again, he's recently made moves to dedicate more time to his riding. Look for Jorge to impress and turn heads and have everyone again asking, "Damn! Who is THAT?"

When Jorge was 6 years old living back in Honduras his cousin rode flatland. He was mesmerized with all of the cool tricks his cousin did on his bike and wanted to be just like him. In 1988 when he was 8 years old his family moved to The Bronx, NY. Jorge's mom had no money and he could not afford a bike. At the age of 14 he started working at a bike shop and purchased his first bike.

One day while cruising through the streets of NY with his friends they ended up in Mullaly skate park next to Yankee stadium in the Bronx and Jorge fell in love with riding. It was an addiction and he knew it was what he wanted to do. Jorge decided that he wanted to travel the world and that his bike was going to help him.

However, countless injuries got in the way and one small wrist fracture kept him off his bike for too long. Years had gone by and one day while at work he began to realize that life was passing him by and he'd stopped dreaming. He quit his great job in New York a few months later and moved to Woodward Camp not knowing what might happen!

He was ready to give it a shot and some how jumped on a vert ramp and became a Vert rider. Now Jorge travel the world doing what he loves!

What do you do when you're not riding?: I love photography, so when I'm not riding I'm taking photos for my friends and weddings. I'm also working on web edits for my video magazine website. I love learning all types of new, artistic things.

Worst injury: I broke my Scaphoid bone in my wrist and that little bone kept me off my bike for a year and a half..Other than that I have no ACL ligaments, have broken both collar bones, separated my left shoulder, broken my left ankle, etc......

Coolest thing you own: My Canon 7d

What's on your ipod: I listen to everything but Jay-Z is on at the moment!

Five things you always travel with: My bike, Canon Camera, hair clippers( Gots to look good),tooth brush and my laptop