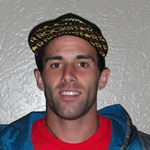 Hailing from the Land Down Under, Luke Parslow shows a true gift in BMX Dirt. In 2005, Parslow was disappointed by his Dew Cup standing. After a year of training incredibly hard, Luke came into the 2006 season more focused than ever. He remained the most consistent finisher in BMX Dirt, always placing in second or third. Although he didn’t take the gold for the Dew Cup, he showed everyone that he was a force to be reckoned with when he took the silver. Always throwing some of the biggest tricks on the dirt course, Parslow struggled to put together consistent runs during the 2007 AST Dew Tour season. Ending the Tour in fourth for the year-end standings, he triumphed with a victory at the PlayStation Pro. And in 2008 he placed 8th in the BMX dirt Finals in the Right Guard Open and 6th in the BMX Dirt Finals at the 2008 PlayStation Pro in Orlando.

When he's not riding: Boxing, cars and enjoying life

Coolest thing you own: My house

Favorite movie: Anything I can make it all the way through