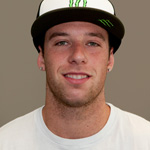 With a last last name that others would kill for, Mike Spinner has burst onto the BMX scene with authority and has proven himself worthy of such a name. Spinner grew up watching Dave Mirra at the X-Games hoping that one day he would do the same. He never could have predicted that in fact, one day he would be riding for the same team as Mirra and competing on the same stage.

Originally from Oceanside, New York, Spinner moved to Miami, Florida with his parents when he was 8 years old. He attended Stoneman Douglas High School in Parkland, Florida and graduated the same year he made his Pro Contest Debut. At 18 years old, Spinner made his presence known at Woodward Camp and he immediately started to create a buzz. He was doing 720's like they were nothing and beganhoning a 720 tailwhip into a foam pit. This was a trick even the pros had never landed in competition.

It was at the Free Flow Tour Finals, which took place at the Dew Tour in Portland, Oregon that he decided to unveil the 720 whip. With the pressure building and all the pro's looking on, Spinner went for it and crashed. With the crowd even more excited than before, Spinner headed back to the top and tried again. This time it was perfect and he would be moving on to compete with the Pros at the last leg of the Dew Tour in Orlando, Florida,

Spinner continued to make history when he pulled the world's first 1080 at Wellington's X-Air contest in New Zealand. Under the guidance of Dave Mirra, he landed three complete sideways rotations on his bike in the air. Spinner took five attempts to land the jump, but with the crowd on their feet Spinner created history. Spinner finished second in the street competition, right behind his friend and idol, Mirra.

Heroes: People that follow their dreams and have a plan for the future.