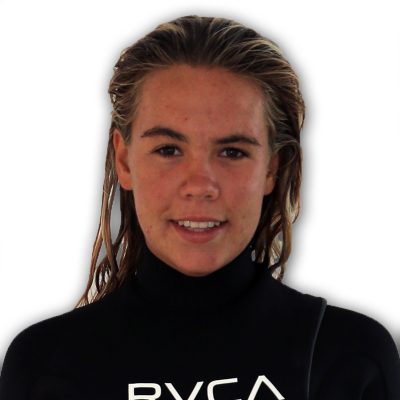 January 2016 Zoe McDougall will focus only on World Surfing League (WSL) Qualifying Series (QS) , & Jr. Pros Hawaii series, and ISA Jr. Pro Championships . It will be her goal to improve results and rankings while continuing her high school education.

Zoe started entering contests at the age of 5 in Oahu in. At the age of 9 she won 1st place in both SB and LB divisions at the Rell Sunn in Makaha 2009 and became hooked on competing. When Zoe was 9 years old she started competing more seriously in the two organizations in Hawaii (HSA & NSSA). At the age of eleven she joined a kids training group with coach Kahea Hart, owner of (North Shore Surf Clinic and a world class coach who also trains the pros). At the end of her first year she had improved so much and became the 1st Place State Champion in U12 short board and U14 Longboard and qualified via both HSA and NSSA to go to Nationals and Surfing America and placed 3rd at Surfing America Championships. At 14 Zoe ranked high enough to be in The Vans US Open Jr. Pro Championships and started working on climbing the rankings in WSL QS contest.

In the fall of 2014 at 14 years old Zoe went to her first WSL Qualifying Series competions in Brazil where she advanced to quarter finals and earned seeding into 6 star events for 2015. She competed all over the world in 2015 and finished in the top 50 on the QS world tour and was the youngest in the world to do so.

Aside from surfing Zoe enjoys doing art, playing ukulele, guitar, reading , training , free diving , and other ocean activities. She is very creative and loves working with her hands. Zoe has always been a top student.