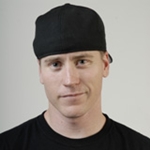 Chad Kagy began his career as a dirt rider, quickly moved to park, and is now one of the top vert riders in the world. He is known for his tailwhip variations and superman seatgrab. His riding has jumped a couple of notches after moving from California to State College, Pennsylvania, where he spends his days riding at Woodward East, the top BMX camp in the nation. Chad is now one of the elite pros in street and vert.

Activities other than riding Hanging out with the family, photography, home improvement, riding my chopper

Career Highlight: 2006 has been my best year so far winning the LG Action Sports Championships and winning 1 Gold medal and 2 Silver at the X Games