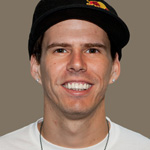 Daniel Dhers stands alone when it comes to BMX park competition. While many riders struggle to learn 360 variations, Daniel has perfected them all and moved on to amass a solid arsenal of 720 tricks. His astonishing consistency has helped him stack up victories all over the world, including multiple X Games gold medals and AST Tour overall titles, and his peers voted to award him RideBMX magazine’s 2008 NORA Cup for Ramp Rider of the Year. There is no doubt in anyone’s mind that Daniel is the man to beat in BMX park, and his competitors are having a rough time doing it.

Growing up in Caracas, Venezuela, and Buenos Aires, Argentina, Daniel struggled to advance his riding skills as his local parks closed down, one by one. He dreamed of riding at Woodward Camp’s expansive training grounds in Pennsylvania, and a chance meeting with a Woodward resident pro at a demo in South America resulted in his first trip to the camp in 2004. He returned the following summer with a single-minded determination to develop unique tricks and land them on every attempt. He made his U.S. competition debut with a win at the Baco Jam in October 2005, though it was merely a glimpse of what was to come.

Daniel threw everything he had into the five-stop AST Tour in 2006, emerging as a virtual unknown to challenge the greatest park riders in the world. He didn’t miss the podium all season, finishing with the overall title in his rookie year. He took the bronze at his first X Games the same year before going on to earn gold in ’07 and ’08. He also repeated his AST title in ’07 and ’08, dominating the series with huge 720, tailwhip, and flair variations at every stop. He possesses an unmatched drive to win, but he has succeeded because of his passion for riding, something every BMXer shares. “I was never in it for the money,” he says. “I just want to ride my bike for as long as I can. Hopefully I can have some longevity in the sport and be respected for what I’m doing.”

When you're not riding:Guitar Hero, Movies, food and just got into real guitar

Coolest thing you own: My DC ring

Favorite Trick: Whips, Flips, and anything that has to do with a spin

Life Highlight: Having an awesome family and lived in 3 countries

Hero/Influence: Antero, Bestwick, and Mirra because they motivate me to ride