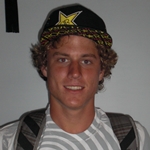 When you first glance at Dennis you think he's a Southern California surfer kid. He's tall, blonde and good looking. But when you actually stop and get to know this talented 21 year old out of La Mesa, CA you realize he has something special. In 2007, embarking upon his rookie year as a pro BMX rider, Dennis Enarson has earned the attention and respect of his older and more experienced competitors by standing on the podium of almost every competition he entered.

Dennis began racing BMX at the age of eight. He later discovered trail riding through friends and found it to be much better suited for him than racing. Dennis was a quick study and has put together a trick list that parallels just about any other rider in the world.

Activities when you're not riding: Skating

Coolest thing you own: My dog Rudy

Wheels other than your bike: 2010 Camaro, Toyota 4Runner

5 things you always travel with: Back pack, bike, i pod, Boxers, Phone

Career Highlight: Filming for writing on the walls and range of motions. Dew tour win in dirt in 07 and 08, King of the animal house

Life Highlight: Moving into my own house with some of my best friends

Heroes: My mom and dad