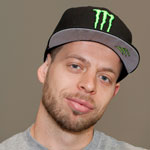 Pierre Luc Gagnon received his first skateboard at the age of 9. At the time, it just seemed like something fun to try, little did he know how far it would actually take him. Pierre's father opened the only skatepark in Montreal, which allowed him to ride everyday. In 1996 after having traveled all over Canada and the east coast of the US, he entered and won the Vans Warped Tour amateur contest. This earned him a spot in the amateur finals, which he won and thus began his professional skating career. After winning the 2002 X Games Vert and Vert Best Trick events, Pierre-Luc finished the year with a world ranking of 2nd place. His gold medal collection includes Tampa Pro, Globe World Championships and the Canadian Open, as well as back-to back wins at the 2005 Paris and Munich LG Action Sports World Tour stops. In 2005 Pierre won the X Games and the LG Action Sports World Championships. Pierre is one of only 15 skaters in the world who are talented enough to compete in Danny Way's Mega Ramp contest series. PLG is perhaps best known for his consistency and his ability to throw back to back flip tricks. When he is not skating, he spins music and lifts weight to stay in shape in Carlsbad, California.

Worst Injury: Broken arm twice, ended up with a metal plate and 6 screws

Activities Other Than Skating: Traveling, gym, movies, and partying

Knew he was going to make skating a career: I was in love with skating and was a natural transition... it just happened!