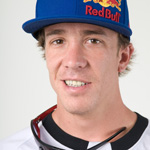 Robbie Maddison rocketed into 2008 with a bang: jumping his motorcycle 322 feet, 7.5 inches to break the world record at the Rio All-Suite Casino and Hotel in Las Vegas, and finished the season on the podium in nearly every contest he competed in. He ended 2008 back in Vegas, jumping his bike onto the top of the 96-foot-high Arc de Triomphe at Paris Las Vegas and then freefell off of it, at Red Bull: New Year. No Limits., again on ESPN.
Now for the real challenge: Robbie's next mission is to prove he can win the top spot in the radically different competition formats on the Dew Tour, at X Games, and, his personal favorite, the international Red Bull X-Fighters series. "Red Bull X-Fighters is my favorite, for sure," the man they call Maddo says. "The locations are insane, the format is great, and they have the most advanced, technical courses so the tracks are testing all the riders. It's really a rider's contest because it's the most challenging, just the highest level contest on every avenue. It takes the cake."
With more than a decade of amateur racing behind him, Robbie has emerged as one of the biggest names in freestyle motocross. He's also managed to turn adversity into advantage, saying that his injuries have only served to help him focus on his goals and raise his own bar. "I broke my leg in Ireland at Red Bull X-Fighters and it really set me back in some ways," he explains. "But in some ways that injury was the best thing that could have happened to me, because it helped me refocus on how important this whole adventure around the world is to me. In the end it fired me up more than ever, so it was a blessing in disguise. Traveling the world, doing something I love, meeting the people I've met, it's been a wild ride and I want to keep it going for as long as I can."

Riding Since: 1985
Favorite Trick: Back flip nac
Worst Injury: Crashed in New Zealand in 2004 and was in a coma for 2 days.
Top three activities other than riding: Wakeboarding, BMX, Jet Skiing
Career Highlight: Setting two world records in 2005, 125 cc long distance record 221ft, and the 250cc longest jump with a trick, 246ft with a heart attack.
Life Highlight: Getting a moto for my 4th birthday
Hero/Influence: Superman